So I watched most of the food bank debate. Not at the time as my bendy spoonie arthur body wasn’t playing ball.

It was a sad sight to watch as Labour passionately recalled stories of people, in desperate need in their constituencies. As Labour were trying to make their point the coalition benches laughed, brayed & tried to shout them down as they attempted to highlight the crisis that is unfolding in this country, one of the richest countries in the world where people are being propped up by food banks, charities as there government continues to fail them.

The coalition benches made the whole Charade feel like the Goverement was implying that poor people are just darn stupid, we’re beating them with this rod with all the welfare cuts & telling them to work so why arn’t they? Their problems would be resolved. If they are at food banks they deserve nothing more, it is of their own doing.

The coalition further blamed people for poor budgeting skills but didn’t understand that for many, when they reached the foodbanks they have fallen so hard & so quickly & for others they have already striped their outgoings down to the bone. If the end line is that you need £60 & you only get £40, how are you supposed to win? Just demonising people further isn’t the answer.

Most of the coalition MPs come from much more privileged backgrounds, that have never had to deal with these problems. These MPs live in a world where they get a food allowance, expenses & subsidised bars. They have never had to hardcore budget like the people that end up at food banks do. They’re in a parallel world were they constantly live with their fingers in their ears & take their party’s doggy statistics on face value.

The coalition put these policies in place & they’re just not logical. If you speak to most, they agree that the system needed reform but it needed to be fair, the coalition need to accept that there are people that are just not able to work & that working isn’t the only solution out of this kind of situation, that work doesn’t always pay which can be seen by the increased number of people in work, forced to rely on food banks as wages are low & commodities high.

The coalition throughout continued to state that the food banks began under the last government which is indeed true but the explosion in the number of food banks under this government demonstrates how much policy is not working & that the simple truth is, that if social policy was better there wouldn’t be anywhere near the demand that there is now.

If anyone agrees that its ok for people in this country to have to rely on food banks, for children to be so grateful that they were given chocolate because its one of the best things they have seen in a while & that for the red cross to be doing its first appeal since world war 2 for the people in the UK, then remember this; anyone can find themselves in this situation & if you’re saying to yourself not me? there have been many people before you that have said the same & yet found themselves in a position they would never have seen coming.

These MPs call each other honourable members, if this is honour, its not an honour I recongnise.
Posted by eGremlin at 10:05 No comments: 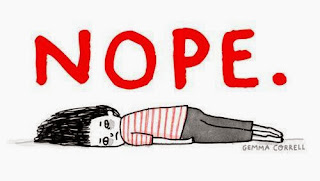 For everyone that feels this way this week.

My body has not wanted to do anything & hasn’t co-operated at all due to my arthritis flaring up & my hypermobility playing up. Don’t get my started on my stomach >.<

Hope everyone has a brilliant week to come

(I do not own the images but respect the awesome)

Posted by eGremlin at 07:44 No comments:

So I haven’t been able to do much that I’ve wanted to do recently as my body has been taking its sweet time to decide whether or not to heal after my surgery & because I have been off my arthritis medication for so long my body is taking a real battering with a lot of inflammation in addition to what I normally have. Also with my arthritis flaring up the fatigue has been worse with it. Fatigue as always is so fricking inconvenient, with you not being asleep nor awake, losing hours at a time.

It’s not been made easier when I have had to go out, mostly to hospital appointments & such. It’s not like its a new thing, ever since just before the last general election this kind of occurrence happens quite often whilst we’re out. When I get on the bus people look at me & see a girl with a stick & more often than not will take more time to judge the legitimacy of my condition than see that I’m about to topple over because the driver hasn’t waited until I have found a seat & I’m struggling to find a seat, as someone is lounging across the disabled seat or the “i’d like a bit more legroom seat”

So often I see these judgmental faces of people that don’t know me. It is often that people won’t offer you a seat until they have seen you nearly topple over because the bus driver doesn’t see you or is impatient and even then it is often begrudgingly.

Often me & Mr TechieCarer will be sitting on one of the disabled seats just waiting for the glares, the comments & even altercations to occur. The glares always happen even though my stick is clearly visible. We have started to talk to loudly about my condition to each other which usually suffices to quiet them down & realise that their judgement is incorrect. We have now come to the point that we will stick up for ourselves, even though we shouldn’t have to because arthritis & all the other conditions I have are not my fault & I have nothing to be sorry about.

I know this isn’t just me & although I have had people be verbally abusive, apart from one guy threatening to sit on me, thankfully nothing physical has happened. I also am grateful that there are people that are kind & thoughtful & they restore my glimmer of faith in humanity every time. I know that other disabled people have delt with much worse, thankfully my local bus company have started a zero tolerance policy towards disability hate crime which is greatly needed to show that this isn’t tolerated.

Another topic I have seen people have a problem with is people on benefits that have a mobile phone &/or animals. I might go into more detail about this at a later time but some people are more obsessed about other people having mobile phones or pets than being happy in their own life.

They don’t understand that mobile phones keep disabled people in contact with the hospital, Doctors & Carers & let them stay in contact with the outside world when their condition doesn’t allow them to go outside. Similarly pets give people confidence, comfort & companionship. They can also greatly help a disabled person reduce their awareness of their pain, even if only for a brief moment.

This links in with an article where Sue Marsh highlights a film which shows how vital the Independent Living Fund is for people to provide basic things that able bodied people take for granted. It is also shown very clearly how much pets mean to disabled people & that no one should be this frightened of losing support.

I can also say after we sadly lost our bunny at such a young age, we did get another. Hes now about 7 months old & is doing really well apart from a very lucky scrape around a week ago.

We noticed his head was tilting to the side & one eye was rolling to the back of his head. I knew this wasn’t a good sign (head tilt) so we rushed him to the vet & the vet said it was either concision or Encephalitis (inflammation) caused by the parasite e.Cuniculi. They believe that over half of rabbits carry the parasite & are asymptomatic all their lives, with about 6% where the parasite becomes a problem causing inflammation. They think that its more likely to be e.Cuniculi because even if you held his head his eye still continued to move. He was given an anti infllammatory injection & panacur to control the e.Cuniculi.

Amazingly I can say that within 1hr & half his head tilt had resolved, as my vet said you wouldn’t know he had head tilt only hours before. He will still have his panacur for a while yet but with head tilt it is so vital that they get to the vet early. Although head tilt can be caused by a varying degree of underlying issues, for e.Cuniculi the quicker they get to the vet, the quicker they get anti inflammatory medication, the better the chance of reducing permanent damage.

So here is the little cutie And finally the WoW Petition surpassed 100,000 signatures! I do not believe that the government will necessarily do anything positive that the petition asks for but the more we can highlight these issues & the more we can bring these issues to the attention of the general public, the better they will be informed of the injustices that are occurring.

eGremlin
I’m a Disabled 'Mutant' Zoologist, I live with Arthritis & hypermobility along with other conditions including chronic pain so I live with the daily challenges of life with a spoonie body. Engaged to my partner Mr TechieCarer. I ♡ thrift, Science, Animals, Nature & Photography, have a passion for all things Geek, Whovian & ♡ a bit of everything in between. I strive for political fairness, disability rights & I’m a bit of a hippy. I think I must be part vulcan as I can not stand the illogical & the ill thought out. I write theegremlin around a spoonie body, being very dyslexic & with a lot of help. Faviourite Quotes: "Life isn't about waiting for the storm to pass; it's about learning to dance in the rain"